Research from an international team of scientists has cast new light on the physics of vitrification – the process by which glass forms.

Their findings, which centre on analysis of a common feature of glasses called the boson peak, could help pave the way for new developments in materials science.

The peak can be observed in glass when special equipment is used to study the vibrations of its constituent atoms, where it spikes in the terahertz range. The boson peak also gives glasses a characteristic additional heat capacity over crystals formed from the same material.

The extra-low vibrations of atoms or molecules that cause the boson peak are believed to play a role in whether a cooling liquid forms a glass or a crystal, but the process is still not fully understood.

In a paper published in the journal Nature Communications, researchers from the UK, Slovenia and Japan outline how they worked together to analyse and model how the boson peak emerges in samples of tetrabutyl orthosilicate – a viscous liquid that does not crystallise and is used in the production of some types of glass.

Professor Klaas Wynne, of the University of Glasgow’s School of Chemistry, is one of the paper’s corresponding authors. Prof Wynne said: “This work helps to advance our understanding of vitrification, which is something of a hot topic in physics at the moment.

“When liquids are cooled quickly, they can form either glasses or crystals – a process that is poorly understood but important to applications.

“Glasses can be made from a wide range of materials, and they are used in all kinds of industries outside of the obvious application of windowpanes. Strong, flexible metallic glasses are used in aviation, for example, and others can be used in drugs where they can help control the rate that medication is absorbed into the body.

“However, a process called secondary relaxation can cause crystals to form in glasses after they cool, sometimes years later. It’s still not entirely clear which molecular processes cause this to happen, and a better understanding of how glasses form could help us make better, safer glasses in the future.”

“One of the challenges of investigating the boson peak is that it happens alongside other processes like molecular vibrations and rotations, which makes it difficult to isolate and analyse. We set out to examine how the boson peak functions under different conditions, using a range of techniques, to help expand our understanding of glass formation.”

The researchers chose to study tetrabutyl orthosilicate, or TBOS, because its molecular structure is symmetrical, which makes it easier to isolate the boson peak from all the other contributions. They used a suite of observation techniques, including Raman spectroscopy, to monitor the behaviour of TBOS molecules as they cooled from a liquid into glass under a range of temperature conditions.

They were able to see for the first time that, as TBOS cools to form a glass, it begins but does not complete the process of crystallisation, offering a key insight into the molecular process of vitrification.

In parallel with the experimental techniques, researchers at the University of Warwick performed computer simulations which were capable of accurately reflecting the laboratory observations and correctly predicting the behaviour of TBOS as it turns to glass. 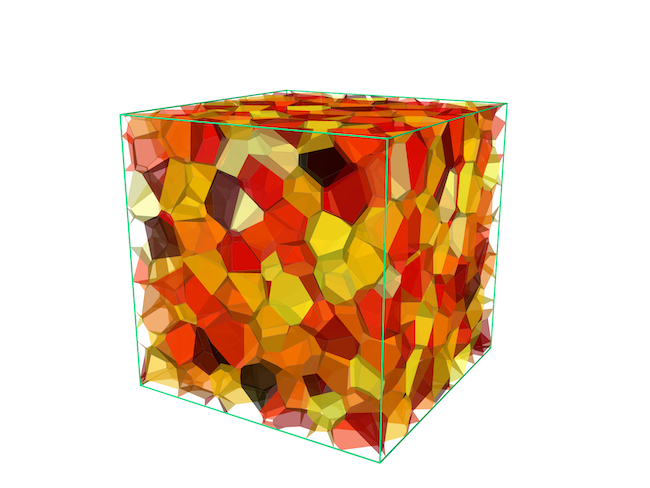 Dr. Gabriele Sosso, of the Department of Chemistry at the University of Warwick, is also a corresponding author of the paper. Dr Sosso added: “The symmetry of the TBOS molecules provided a unique opportunity to make a connection between modelling and experiments.

“In the past few years, we have learned a lot about glasses, largely thanks to computer simulations of what we often refer to as ‘simple’ models – think of two- or three-dimensional networks of spherical particles. These simple models are incredibly useful to unravel the subtleties of disordered systems – TBOS, however, is a whole different beast! It was very rewarding to apply what the community has thought us about model systems to a real-life molecular glass such as TBOS.

“The fact that the boson peak in glassy TBOS seems to emerge from very specific structural features represents an incredibly enticing prospect for the computational community. I for one cannot wait to see what these structural features would look like in other types of molecular glasses – exciting times ahead!”

The team’s paper, titled ‘Understanding the emergence of the boson peak in molecular glasses’, is published in Nature Communications. The research was supported by funding from the European Research Council, the Leverhulme Trust, the Engineering and Physical Sciences Research Council and the Slovenian Research Agency.

All News
£2m for Glasgow Cancer Centre to help find new treatments
University of Glasgow overcome key quantum tech challenge
International award for University of Glasgow Chemist
Newsletter sign upSign Up
We use cookies to ensure that we give you the best experience on our website. If you continue to use this site we will assume that you are happy with it.Ok